Normally, as Newsmax readers know, we put a photograph on our front cover. This month you’d be forgiven if, for a moment, you wondered how we managed to find such a remarkable - and pristine - picture of President Abraham Lincoln.
Truth is, we didn’t.
Instead, we found Rossin, a Bulgaria-born artist, who has become one of the world’s leading portrait painters. Long a leading portraitist in his native Europe, and later, Japan, the still youthful Rossin immigrated to the United States in 2001.
Since then, he’s been busy with scores of top-level commissioned works: George H.W. Bush and his son, George W. ( for the new George Bush Presidential Library); former Watergate prosecutor Archibald Cox; Former US Attorney General Griffin Bell; and two former chairmen of Coca-Cola among others.
He recently completed the magnificent portrait of Abraham Lincoln, which debuts this month on our cover in commemoration of our 16th president 200th birthday.
Prospective buyers of the $150,000 oil can reach the artist’s representative via Rossin’s website: www. RossinFineArt.com
I see Lincoln as a figure of biblical proportions", the artist tells Newsmax. "His heroic stance is combined with profound wisdom and humanity."
What was Rossin attempting to communicate with his photo-realistic portrait of the beloved president?
"I wanted to go beyond the well-known image and take a journey into his psyche."
"What was truly striking for me," he says, "is his gaze, both calming and provocative." 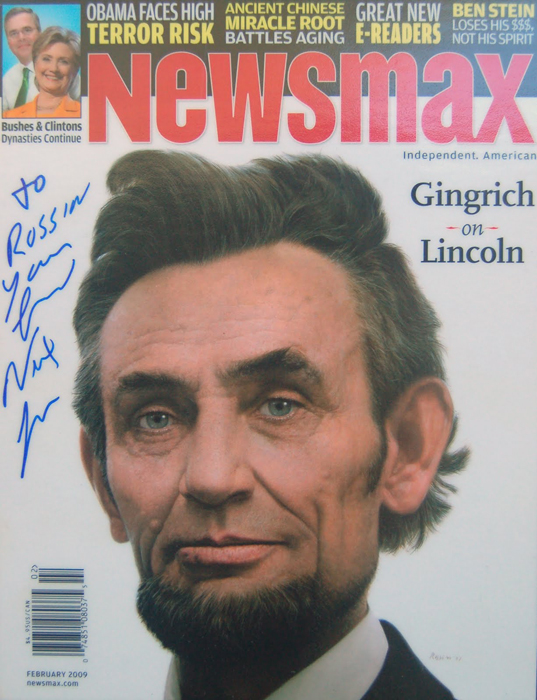 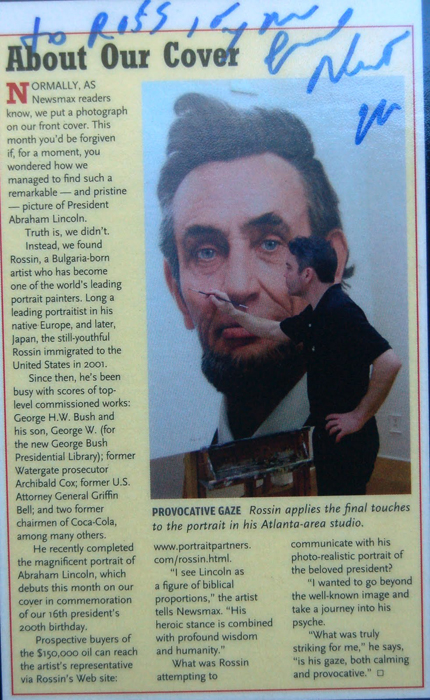 Back
0
0
0
s2smodern
powered by social2s

ROSSIN IN ROME, ITALY IN FRONT OF HIS PORTRAIT OF...

ROSSIN UNVEILS HIS FRANKENSTEIN AT EMORY

Rossin Creates His Frankenstein, In Honor of Mary Shelley’s Masterpiece

What You Haven’t Heard About the New Maya Angelou Stamp

Sculptor of Hank Aaron statue grateful to ‘capture one of...

THE UNVEILING OF ROSSIN'S 9 FOOT BRONZE STATUE OF BASEBALL...

TIM HUDSON'S VISIT TO THE STUDIO

HANK AARON IN THE STUDIO

BTV INTERVIEW WITH ROSSIN ABOUT LEVSKI

ROSSIN, FIRST LADY MICHELLE OBAMA AND OPRAH WINFRY AT THE...

THE ART OF LIVING ROSSIN AT TEDXPEACHTREE

HANK AARON, PORTRAIT IN A MINUTE

THE ARTIST ROSSIN DISCUSSES HIS PORTRAIT OF CIVIL RIGHTS LEADER...